April 9 (UPI) — NASA’s plan to fly a helicopter on Mars comes to fruition Sunday with an attempted 40-second climb to just 10 feet, but agency officials say they hope to make bolder efforts in the next few weeks.

“We’ll be going higher and further,” MiMi Aung, the space agency’s project manager on the helicopter, Ingenuity, said Friday. “By the fifth flight, if we get that far, we are going to take very bold flights and … it would be unlikely to land safely because we’ll start going into unsurveyed areas.”

NASA plans to fly Ingenuity at 10:54 p.m. EDT Sunday, but results won’t be available until 4:15 a.m. Monday due to transmission delays between the helicopter, the rover and Earth. A live broadcast of the mission control room at the Jet Propulsion Laboratory in Pasadena, Calif., is scheduled to begin at 3:30 a.m.

The tiny, 4-pound helicopter has dual rotors — each about 4 feet long — that spin in opposite directions at high speed. A test of those rotors Thursday indicated they are working correctly, officials said.

“We know it can fly in atmospheric conditions like Mars because we tested it here on Earth in a simulated environment,” said Amelia Quon, an Ingenuity test engineer.

But agency officials said they are prepared for surprises and even failure because the helicopter is purely a demonstration to determine if such flight on Mars is possible, said Thomas Zurbuchen, NASA’s associate administrator for science.

Referring to a tiny piece of fabric on the helicopter taken from the Wright Brothers’ first aircraft, he proclaimed, “We’re ready, on the surface of Mars. We’re ready for another historic moment.”

Ingenuity is designed only for a 30-day demonstration, after which Perseverance is scheduled to continue on its primary mission — drilling rock samples in a search for signs of past life on Mars.

The Mars rover Perseverance deposited the helicopter after it landed on the Red Planet on Feb. 18. Perseverance has driven a little over 200 feet from that site, and will attempt to take video of the flight.

Ingenuity has cameras on board, as well. NASA hopes to obtain rudimentary data and black and white images by early Monday.

About 11 a.m. EDT Monday, Ingenuity and Perseverance should be able to send back higher-quality video and color images, officials said.

As a demonstration, Ingenuity is meant to lay groundwork for future aerial missions on Mars and other planets, Aung said.

“There is ongoing research. … [NASA] has been looking into future missions and larger vehicles … to make a significant exploration,” she said. 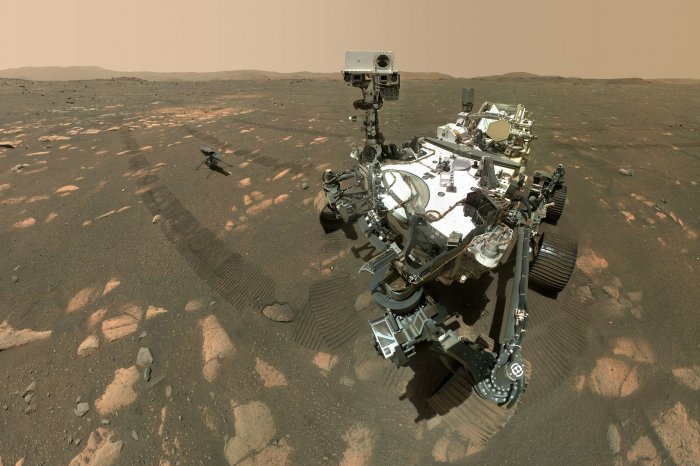 NASA’s Perseverance Mars rover took a selfie with the Ingenuity helicopter on April 6, using the WATSON (Wide Angle Topographic Sensor for Operations and eNgineering) camera located at the end of the rover’s long robotic arm. The image was constructed of 62 individual images, taken in sequence while the rover was looking at the helicopter, then again while looking at the WATSON camera, stitched together once they are sent back to Earth. The Curiosity rover takes similar selfies using a camera on its robotic arm. Photo courtesy of NASA | License Photo