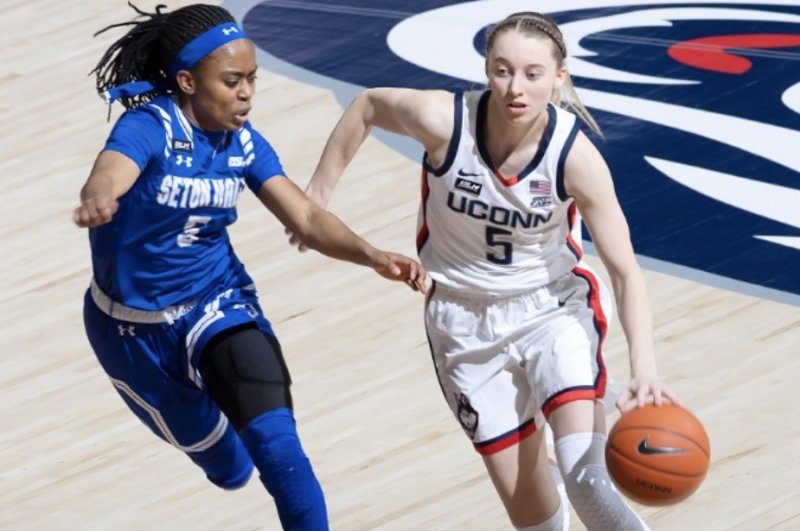 MIAMI, April 1 (UPI) — Hall of Fame coach Geno Auriemma has seen almost everything at UConn. He has 11 titles and has mentored scores of All-Americans, but he can’t fully describe the brilliance of freshman Paige Bueckers at the NCAA tournament.

“Paige does a lot of things you can’t explain,” Auriemma told reporters after UConn beat Baylor in the Elite Eight on Monday in San Antonio.

Auriemma, who has coached UConn since 1985, admitted that the freshman still has some elements of her game that need work. But he also said Bueckers has traits he can’t teach.

“What she can do is she can sense the moment,” Auriemma said of Bueckers’ ability to make great plays at the toughest moments. “Like all great players, she can sense when it’s time and what’s needed, when it’s necessary.”

Bueckers, the only freshman up for women’s college basketball Player of the Year honors, led the Huskies with 19.9 points per game this season. She has averaged 22.5 points per game though four NCAA tournament games.

Her latest outburst was a 28-point performance, which helped the Huskies punch their ticket to the Final Four. She also sparked a 19-0 run for the Huskies against the top-ranked Bears defense in the Elite Eight victory.

“She has the ability to fill the moment, not everybody does,” Auriemma said. “You could see that from her in high school.”

In the Baylor game, “Paige making shots ignited everyone else and got everybody feeling much better about themselves,” Auriemma said.

Bueckers, 19, was so dominant at Hopkins High School in Minnetonka, Minn., that she was named 2020 Gatorade National Player of the Year. She then chose to attend UConn, a women’s basketball factory for top recruits.

She was just 6 when UConn started its current streak of 13 consecutive years of making the Final Four. And she’s the main reason behind the Huskies’ latest push into the national semifinal.

“As a little kid, I would be outside at the park envisioning these moments,” Bueckers told reporters Monday. “But you never really know if you will get those chances and opportunities.”

Bueckers was in seventh grade when she was dominating JV games at Hopkins High School under former coach Brian Cosgriff. She told Cosgriff when she was in the eighth grade that she wanted to play at UConn.

She left Hopkins with a 72-game winning streak and a state title. Bueckers went to UConn on a full scholarship.

“She has far exceeded any expectations I had. … I look at it and say, ‘How lucky was I to be able to coach this kid?'”

Cosgriff said he knew when he first saw Bueckers play that she had the ability to raise her level of competitiveness in the most intense on-court situations. He also praised her selflessness as a teammate and said Auriemma told him they’d work on getting her to shoot more in college.

“When you look at her, you see she’s not very tall or strong, but she can flat-out play and isn’t afraid of anything,” Cosgriff said. “She has a high basketball IQ.

“I think she is the best player in college basketball, hands down.”

Bueckers said Monday that her basketball dream was “shattered” in March 2020, when the Minnesota state championship matchup between Hopkins and Farmington was canceled due to COVID-19.

She said she has used that sinking feeling as motivation to return for another title and that her dream moved one step closer coming true when the final buzzer sounded Monday.

“It’s so rewarding to hear that final buzzer go off and you win and you make it to the Final Four,” Bueckers said. “It’s really an unexplainable feeling that you get from it.”

Bueckers set the UConn record for most points in an NCAA tournament debut March 21 against High Point. The Big East Player of the Year and Big East tournament’s Most Outstanding Player also set school records for assists in a single game and assists in a season by a freshman.

Those early accomplishments, especially if paired with Player of the Year honors and a national title, vault Bueckers into the conversation of all-time Huskies greats. That list features some of the best women’s basketball players in history: Sue Bird, Rebecca Lobo, Breanna Stewart, Maya Moore and Diana Taurasi.

Each of those players won at least one national title for the Huskies and succeeded in the WNBA.

Stewart was perhaps the most successful. She won four national titles and was named the tournament’s Most Outstanding Player four times. Stewart also was a three-time National Player of the Year award winner.

“That’s why I came here — the winning they’ve done,” Bueckers said of the Huskies. “I watched it on TV as a young kid and said ‘Man, I want to be a part of that.”

She added: “I grew up watching [former UConn center] Stefanie Dolson. She was my favorite player. It’s crazy to be part of that history right now.”

Bueckers could add more to her resume in years to come, due to the WNBA’s entrance requirement. Players must be at least 22, complete college eligibility or have been out of high school for four years if they want to turn pro. Men’s college basketball players can leave school after one year and enter the NBA.

Bueckers will try to get one step closer to a national championship when the Huskies face Arizona in the Final Four on Friday in San Antonio.

“We have two games to go,” Bueckers said. “We want to win and compete for a national championship. I don’t think any of us are satisfied. We still have that killer mentality.”