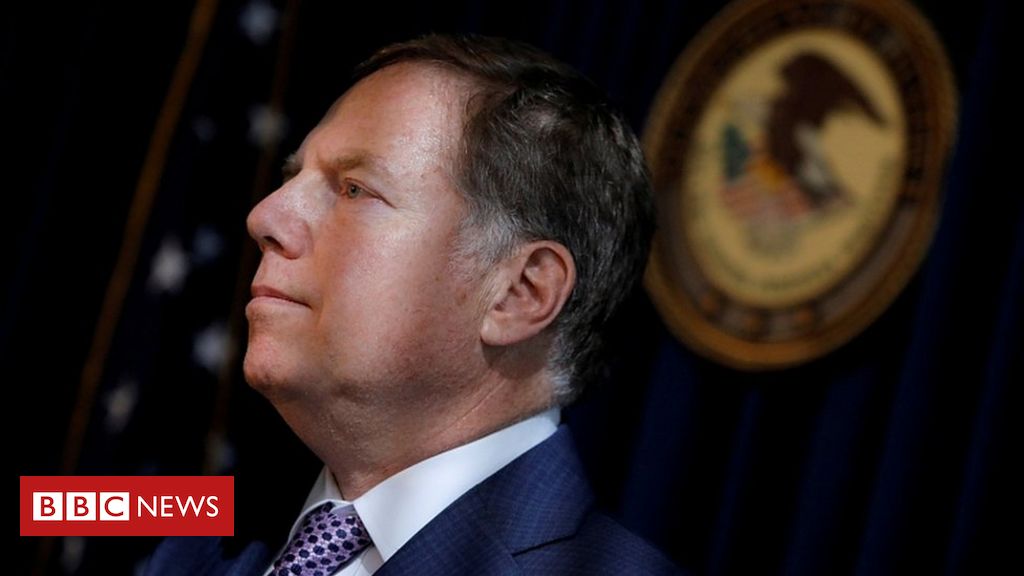 A top federal prosecutor has issued a statement saying he has not resigned, despite the US Justice Department announcing he was stepping down.

Geoffrey Berman, the US Attorney in Manhattan, said he learned he was “stepping down” in a press release issued by US Attorney-General William Barr on Friday evening.

Mr Barr gave no reason for the move.

He said Securities and Exchange Commission chairman Jay Clayton would be nominated to succeed Mr Berman.

Mr Berman has overseen the prosecution of a number of US President Donald Trump’s associates since he took office in 2018.

They include President Trump’s former lawyer Michael Cohen, who has served a prison sentence for lying to Congress, the US legislature, and election campaign finance fraud. Mr Berman’s department has also been investigating the conduct of Rudy Giuliani, Mr Trump’s current personal lawyer.

He is also leading the investigation into Jeffrey Epstein and who earlier this month accused Prince Andrew of “shutting the door” on his probe.

In his statement, Mr Berman said had “no intention of resigning”, adding he would only step down when a successor had been confirmed by Congress.

Mr Berman was appointed to his position by a court, making it unclear whether President Trump has the legal authority to remove him, BBC North America correspondent Anthony Zurcher says.

Senior Democrats have accused Mr Barr of politicising the US Justice Department and making legal decisions at the behest of President Trump.

The row comes days after former National Security Adviser John Bolton said in a book that President Trump had pressed Mr Berman’s office to halt an investigation into the Turkish Halkbank in a bid to make a deal with Turkey’s president.

What did Mr Barr say in his press release?

In his statement, Mr Barr – a close ally of the president – said Mr Berman was “stepping down” after two-and-a-half years in the post.

Mr Barr said Mr Berman had “done an excellent job”, achieving “many successes on consequential civil and criminal matters”, but gave no explanation for his resignation.

Mr Clayton’s “management experience and expertise in financial regulation give him an ideal background” to lead the US Attorney’s Office for the Southern District of New York, Mr Barr said.

The US attorney in New Jersey, Craig Carpenito, will serve as acting head of the office until Mr Clayton has been confirmed.

What did Mr Berman say?

In his statement, Mr Berman said: “I learned in a press release from the Attorney General tonight that I was ‘stepping down’ as United States Attorney. I have not resigned, and have no intention of resigning, my position.”

He said judges for the Southern District of New York appointed him to the role, and would only step down when a presidentially appointed nominee was confirmed by the Senate.

Mr Berman added: “Until then, our investigations will move forward without delay or interruption. I cherish every day that I work with the men and women of this office to pursue justice without fear or favour – and intend to ensure that this office’s important cases continue unimpeded.”

Who is Mr Berman and what other investigations has he been involved in?

Mr Berman, 60, was appointed in January 2018 after Mr Trump fired his predecessor, Preet Bharara, who had refused to resign.

Mr Berman is a long-time Republican donor, including to Mr Trump’s presidential campaign.

He is reportedly investigating the business dealings of President Trump’s personal lawyer, Mr Giuliani, who used to work for the same law firm as Mr Berman.

Mr Berman is also the prosecutor in charge of the investigation into sex offender Jeffrey Epstein and has previously expressed frustration over the Duke of York’s role in the inquiry.

Earlier this month, Mr Berman said Prince Andrew – a former friend of Epstein – had “repeatedly declined our request” to schedule an interview. The duke’s lawyers reject claims he has not co-operated.

Top prosecutor may be latest target of Trump’s wrath

Geoffrey Berman is not going quietly.

Attorney-General Barr may have thought replacing a top US prosecutor would be a smooth process. But Mr Berman – by refusing to resign – has shown he has other ideas.

Mr Berman also may have the law on his side, as this particular US attorney was appointed to his position by a court, not the president, making it unclear whether President Trump has the legal authority to remove him. A court may have to sort this out, too, creating a procedural headache the White House surely hoped to avoid.

Looming over all of this is the question of why the president, and his attorney general, felt compelled to do this now, just five months before election day. The suddenness of the dismissal, coupled with the fact that Mr Berman is overseeing an investigation into the president’s personal lawyer, Mr Giuliani, amid other corruption inquiries are already prompting accusations of impropriety.

In the months since being acquitted in his impeachment trial, Trump has removed a number of government officials for apparently insufficient loyalty. Mr Berman may be the latest target – albeit a stubborn one.

Read more from Anthony:Four reasons why this was a bad week for Trump

What reaction has there been?

Writing on Twitter, Mr Bharara, said that the timing and manner of the move to replace Mr Berman was strange.

“Why does a president get rid of his own hand-picked US Attorney in SDNY (Southern District of New York) on a Friday night, less than five months before the election?” Mr Bharara said.

Democrat Jerry Nadler, the chairman of the House Judiciary Committee Chairman, said he was not surprised by the move, accusing Mr Barr of repeatedly interfering in “criminal investigations on Trump’s behalf”.

“We have a hearing on this topic on Wednesday,” said Mr Nadler. “We welcome Mr Berman’s testimony and will invite him to testify.”

America is right to expect the worst of Bill Barr, who has repeatedly interfered in criminal investigations on Trump’s behalf. We have a hearing on this topic on Wednesday. We welcome Mr. Berman’s testimony and will invite him to testify. https://t.co/SpVYzLhANR

The Democratic leader of the Senate, Chuck Schumer said Mr Berman’s dismissal “reeks of potential corruption of the legal process.

“What is angering President Trump? A previous action by this US attorney or one that is ongoing?,” he said.